More children than ever before are experiencing neck issues from looking down at smartphones and other electronic devices. At TekNekk, we developed a way to help kids maintain good posture while using smartphones. 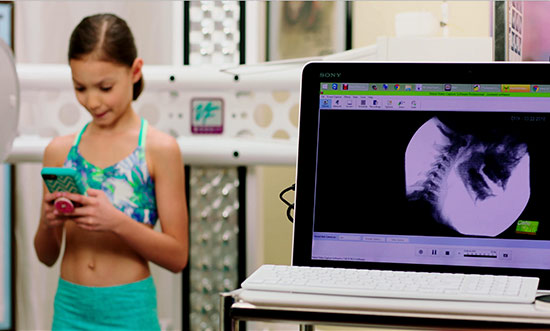 This feature dims and blocks the screen when the phone is held at an improper angle to prevent known irreversible and permanent neck issues that may develop in children and adolescents because of repeated neck flexion, and looking down for prolonged periods of time. As aforementioned, this condition is medically diagnosed as “Text Neck” Syndrome. Spending many hours looking down at a phone over many years may cause Text Neck, or the development of Skull Horns later in life.

A Solution for Text Neck 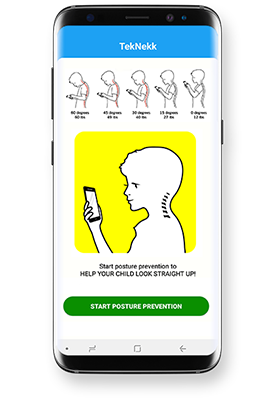 TekNekk’s “Text Neck”  Prevention feature is designed to allow the shoulders to comfortably rest in their hinges with the head at the minimum appropriate angle to prevent Text Neck. With TekNekk, children can maximize comfortable use of a smartphone with minimal risk to future neck pain symptoms, and spinal development. Additionally, getting tired from a position is a natural queue for the child to stop using their phone and go do other activityies. 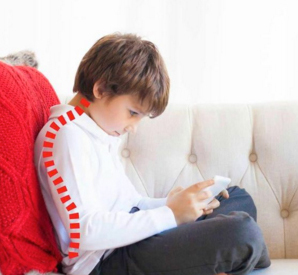 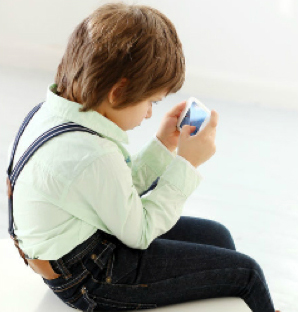 Parents will do anything to protect their children’s spine, right? At TekNekk, our mission is to “Save a Generation of Children” by changing the way they hold and use their smartphones to prevent future health consequences. The absolute last thing parents want is for their child to develop long-term irreversible spinal alignment issues.

Effects of “Looking Down” a Curved Spine (Kyphosis), or Hunchback Syndrome 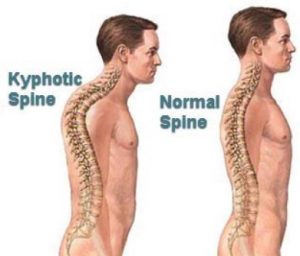 Dr. James Carter says “Text Neck” is often brought on by staring at smart phones for several hours, pictured (middle) is a man in his early 20’s with a severe backward curve and (far right) is a man in his 80’s showing extreme degeneration. Research suggests that smart phone users spend an average of 4 hours a day staring at their device resulting in up to 1400 hours a year of excess stress on the cervical spine. The posture we adopt as we stare at our phone causes excessive wear and tear that may often require an operation to correct it. Dr. Carter, a former Governor of the Australian Spinal Research Foundation, said “the spine can shift by up to 4 cm after repeated head tilt. He believes damage can be minimized for teenagers through regular exercise, and a natural “healthy lifestyle”. 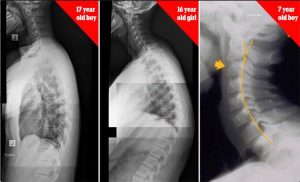 Shocking X-Rays of teenagers have been released to raise awareness about a condition called “Text Neck” with an abnormally curved spine. The 7-year old boy on the right is already developing signs of “Text Neck” that may ultimately lead to condition known as “Kyphosis” also known as “Round Back” / Hunchback like the man on the far left. A leading Australian Chiropractor, Dr. James Carter, said “instead of a normal forward curve, patients can be seen to have a backwards curve. It can be degenerative, often causing head, neck, shoulder, and back pain. Many patients come in complaining they have a headache, but we actually find text neck is the cause. They often fail a simple heal-t0-toe test and tend to fall over.” 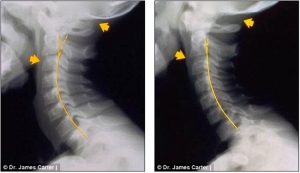 Regarding the two X-Ray pictures on the left, Dr. James Carter had one 7-year old patient with “Text Neck” symptoms pictured before (left) and after treatment (right).